This is a simple tree stamp from an old Stampin Up set. They were both colored with Copic markers and put together with whatever I found laying around.

This one I added a Cricut die cut behind it and a star on top. I sprayed the cardstock with Ranger Perfect Pearls Mists, Sunflower sparkle. For this one, I used a scrap of patterned paper and two borders punched out of green Stampin Up cardstock with a Martha Stewart punch. I added a sentiment by Hero Arts on white cardstock and a star on top. When I colored the image I added a shadow to the left with a bunch of colors on the table. 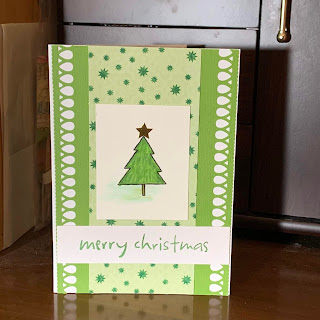 Thanks for looking
Posted by Cindy Groh at 3:00 AM

Thank you for commenting.
Have a great day.
Cindy